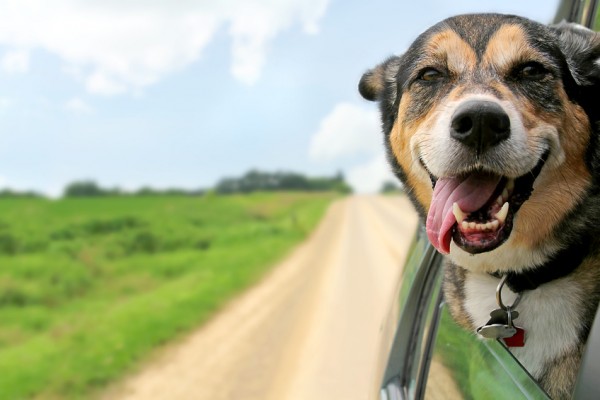 There once was a wonderful dog that my grandmother had many years ago.  His name was The Fox due to his arguably fox-like appearance.  The Fox loved to go for car rides with my uncles and I. When we returned to the back alley behind my grandmother’s house, it was something of a ritual to let Foxy out of the car so that he could run the rest of the way. Anticipating the opening of the car door, The Fox would launch like a rocket, his legs all but completely invisible under him. He would tear along that alley with such intensity and speed that it would make Usain Bolt proud. He would effortlessly beat the car back to the house, then wait expectantly for us to catch up.  Watching The Fox run was an exhilarating experience by itself; in those moments, it seemed like he had thrown off his earthly shackles and did what he was born to do.

For the past few months, I have been fully and completely immersed in a local startup company called IrisPR. So far, the experience has been a tremendous opportunity to learn some new lessons and build something interesting.

This startup experience has been very similar to the run of The Fox. It is both refreshing and exhausting; inspiring and scary; a glorious channel for letting my passion for building things run free.

Being something of an introspective person, I wondered about this.  I am considered by my peers to be someone that typically puts a lot of energy into their work.  That said, it had been a long time since I felt great being so deeply immersed in it. The last time I remember feeling these things about building software was between the year 2000 and 2002.  Yes, that is quite a few years back, possibly an entire career span for some.

Having this realization, this leads into some key questions: what specifically is it about a startup that helps me engage in this manner?  Why don’t typical corporate software gigs tend to do that?

Much has been written about these things, and but it still seems like a nebulous topic in the tech world.

In thinking deeply about it, I believe I finally identified some answers, at least for myself.

Identification with a Goal

I have built software in companies that had tremendously unclear goals.  Upon reflection, these companies all had a similar trait on the technology side: they had weak technical leadership that clouded the high-level corporate vision and made it more difficult to translate goals into something meaningful at an execution level.  This weak technical leadership was nearly always in one of two forms, sometimes both:

These two items, even with the best of intentions on each individual, often obfuscate the meaning and contribution of tech to the business objectives.

In IrisPR, the team is small enough and the goal is clear enough that everyone gets it.  There is plenty of naturally intense conversation around the details, but there is no confusion around the mission.  When I can clearly understand the goal, I feel like I can bring more sharp focus to my work.  That focus brings the tremendous thrill of perceiving the value of my work.

Of course, it also helps if the goal is something interesting, big, or challenging.  Changing the world is a far more appealing objective than making someone rich.

There is no shortage of personality in the technical realm.  My dear readers have probably worked with A players and B players, or perhaps even transitioned from one to the other under certain conditions.  There are drama queens that like to hold the business hostage to their technical prowess.  There are one-trick ponies that hang their hat on one specific technology, even if it does not fit the problem they are solving.  Not everyone can or will contribute the same way, and in the same amounts.  There is nothing inherently wrong with these things, but I find that my own engagement can be more challenging to sustain when there is a lot of drama, or when there is no sense of community in the team.

The IrisPR team is a small, smart, motivated, supportive group.  There is a feeling of responsibility for each other that is openly encouraged, whereas artificial drama is not.  Open discussion is the name of the game, and elephants in the room are addressed directly. Everyone is in it to see it succeed.  For me, this sense of teamwork is a  theme that I find highly motivating.  I don’t want to let my teammates down, whether that means fixing bugs for the customer support person, or automating some dreary task that is unnecessarily consuming someone’s time.  My team between 2000 and 2002 had this same feeling.

Another big factor that ignites me in a software role is the feeling that I have a voice in the decision making of the company.

I’ve been in plenty of organizations that would ask for information or decision support from technical players, only to see it summarily dismissed for a variety of reasons.  When this happens frequently enough, the technical players will tend to think that their input has no value, and eventually they will disconnect in order to protect themselves against this feeling of worthlessness.

At a small startup, this would be a dangerous situation.  Both sides must realize that they need a deep commitment to each other, and to the overall goals in order to make things work.  This is similar to a personal relationship from the standpoint that each side must enunciate their position with the company goals in mind.  They must respect and honor the views of the other, and find a way forward together – or part ways, as the case may be.

What About Money And Those Other Things?

Many startups that try to build a technical team tend to fixate on the only levers that they perceive as being under their control. The usual candidates are money, benefits, equity, and so forth.  Some companies like to supply free breakfast, convenient transportation, and the list goes on.

The way I see it, the benefits such as health care are required to come to the party at all.  Salary has to cover my bills and allow me to live a life, perhaps to retire one day when I stop enjoying this work so much.  Yes, more money is better, but that is not where the passion comes from.  Free breakfast, foosball, or beer in the fridge?  Nice, but I really don’t care much about those things.  I’m here to build stuff.

When the elements I described above come together in the right way, I find it much easier to get fired up about solving problems.  When I am in this mode, I engage with my mind, my heart, and my soul.  My creativity level is much higher, and it can appear at the strangest times.  Sometimes I dream of solutions to problems, other times a solution will occur to me while doing mundane household tasks, doing some athletic endeavor, or playing music.  There is a level of drive and intensity that is more pronounced.  During these times, I think back to The Fox and hope that I am doing it with the sheer joy that he did.