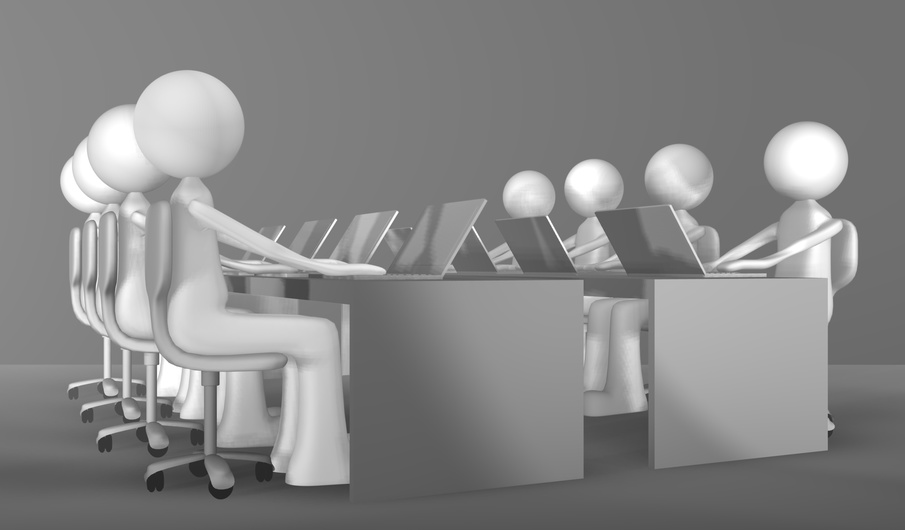 What has a hundred legs, sits in your office, occupies fifty computer screens, clicks on keyboards and trackpads all day, and gets nothing accomplished?

Wait, the CEO says.  What is going on here?  We hired a bunch of developers.  We bought a very long party table and two very long benches. We put everyone together in a warehouse with a tin roof and a giant Steve Jobs motivational poster.  We supply soda and pizza five days a week (and beer on Thursdays.)  We made every Friday into Hawaiian shirt day.  Why aren’t they producing great software?

Why, indeed.  You see, dear reader, software is not necessarily linear in nature.  It is an abstract, complex, creative endeavor.  If one equates software development to shoveling rocks into wheelbarrows, the results will be bitterly disappointing.

Let us explore this together.

A Tale of Two Teams

The Blue Team is led by a director having no development background. He does not spend much time thinking about best practices, but believes that competent developers should either produce 100% bug-free software, or be fired.

Blue Team is composed of the original technical co-founder and a band of developers brought on after the initial product version was built. The technical co-founder still plays the “hero programmer” role, and does not openly share his substantial domain expertise with his new colleagues – after all, if the information was difficult to obtain, then everyone should have to go through a hard indoctrination, right?

The Blue Team developers have learned to be very risk-averse because they don’t understand the software under development as well as the co-founder does, and they certainly don’t want to be accused of breaking the software through their own ignorance. Iterations are chaotic partly due to the lack of disciplined processes, and partly due to tribal knowledge that is lacking from developer to developer.  When deadlines loom, the approach preferred by the director is to work harder and longer. When bugs arise, they end up at the feet of the original authors because nobody else knows what was done, or how it was done.

The Red Team is led by a director with a background in technology. This director is an expert at balancing engineering discipline with the realities of business prioritization.

Red Team developers pride themselves on being students of the art and craft of software. The team purposely uses modern tooling and takes accountability for their releases using a pragmatic test and deployment strategy.  They choose tech stacks and languages based on technical, business and environmental conditions rather than religious dogma. They manage iterations with discipline and maturity.

The team keenly and openly shares code, ideas, and solutions with each other. Designs are challenged within the team in a supporting, professional, and positive manner. This cross-pollination of knowledge also means that when something breaks, the team can cover for each other. Every second Friday afternoon, the team takes time to improve their own skills by researching and exploring novel projects using the latest tech. These behaviors are openly espoused and promoted by the director, and some of the new ideas from developers even make it into the core product.

And Now, a Quiz

These teams represent two extreme examples, but they are based on very real scenarios. Time for a simple quiz.

If you answered “the Red Team” for most of these questions, you are probably correct.  The Blue Team might actually produce an initial version of software more rapidly, but it would likely be sub-optimal over the longer term.  This is Conway’s Law in effect.

There is a term for the difference between these two teams.  That term is “development culture.”

What is Development Culture?

Yes, dear reader, development culture is a real thing with pronounced effects on the way knowledge work gets done.  Here is my own definition:

Development culture is the way a development team works, and how they produce results.

This definition is purposely broad.

Development culture is about how developers build products; how developers relate to each other, their team, the surrounding business, the physical environment, the processes and tools, and the product itself.  On an interpersonal level, it is about communication, teamwork, unit integrity, and how obstacles are handled, ranging from high level strategy to low-level tactics.

In my own travels, there has been no single universal standard for “good” or “bad” development culture.  It is specific to the organization and the individuals involved. If a developer is working in a Red Team, it may not matter if the company supplies free meals, a laundry service, or beer parties – the developer is probably having great fun doing the work, surrounded by a vibrant team.  Similarly, on a Blue Team, the free meals might have to be plentiful and delicious to keep a developer from leaving.

Is Your Development Culture Healthy?

You don’t always need a doctor to tell you that you are sick.  Similarly, there are telltale signs that indicate whether your development culture is healthy without knowing all of the details at the ground level.

Revisiting our Red Team, their product and their practices would likely show the following:

How about the Blue Team?

Moving from Unhealthy to Healthy

Unfortunately, in my experience, unhealthy development cultures are by far the most common. I consider unhealthy cultures to be the automatic result of neglectful behavior.  A healthy development culture takes work, intentional design, empathy, and – possibly the most difficult thing – the release of a certain amount of control. Hiring smart people often requires you to get out of the way in order for their best work to happen.

If your organization is like most, you probably have a combination of characteristics from the Red Team and the Blue Team.  Here are some ways to reduce or eliminate those Blue Team tendencies:

I have worked with highly engaged teams producing software in corporate environments that most would consider bland and depressing. On the other hand, I have worked with teams that are disillusioned and unproductive despite having all the accoutrements of a modern startup.

Development culture has many influencing factors, but its effects on developer engagement and productivity cannot be overstated.  If you are a tech leader, I encourage you to engage with your teams and weave conscious intention into your own culture. While difficult, it will be well worth the effort.